Our lovely Community Member BerinMade is giving away 3 boxed sets of these silver foiled ‘Cheers’ Cards this week.

Three random winners will be picked on Wednesday 17th at 5pm (GMT) and announced that evening.

Entries must be from the UK for Christmas delivery.

Above: Daisy Shah poses with newlyweds Arpita Khan and Aayush Sharma Below: Bride Arpita Khan’s brothers Salman, Arbaaz and Sohail perform the rituals. Wedding was held according to Punjabi rituals.

So, the most anticipated Bollywood family wedding of the year has just taken place, and with the ceremony, held at the prestigious Falaknuma Palace, being a super private affair, we at Think Shaadi thought we’d treat you to some info, that we’ve sourced from around the web.

Above: The newlyweds towards the end of their wedding day Below: The grand surroundings of Falaknuma Palace, where the couple and guests ate a beautifully prepared meal of Deccan cuisine.

Let’s get started with some background details about the couple. Arpita Khan is the adopted daughter of Bollywood legends Salim Khan and Helen Richardson, Arpita is currently working with a leading architectural and interior design firm, with plans to make a move into the film industry, like her father and big brother Salman. Her husband Aayush Sharma hails form Delhi, and although previously a businessman he nurtures a dream of making a career in Bollywood. The couple are certainly well suited, dating for some time and with the added bonus of the two families taking an immediate liking to each other. 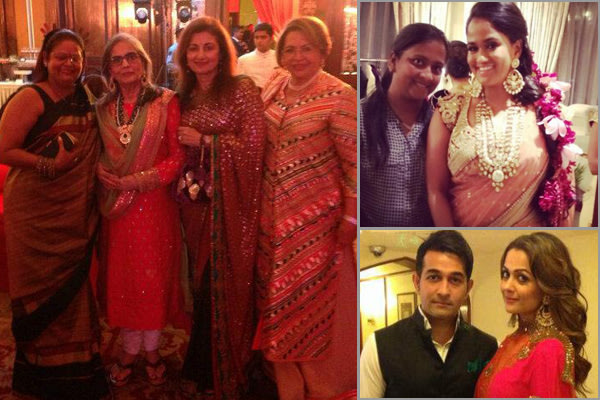 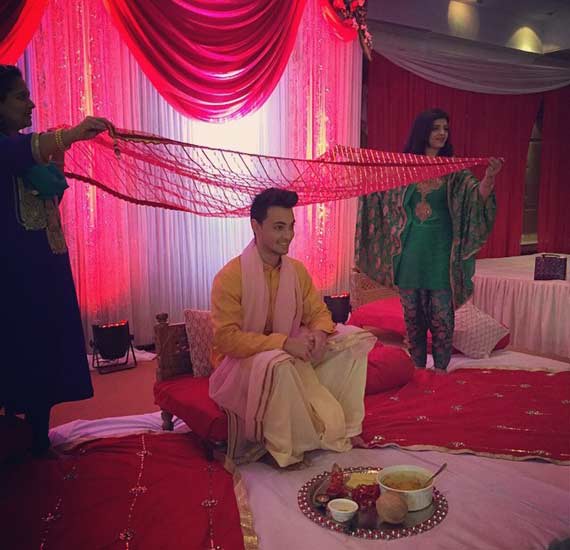 Above: Arpita with various friends and family during her Mehendi Below: A handsome Aayush during the Haldi ceremony.

The festivities began on Sunday, with Arpita’s pre-wedding Mehendi at the couples gorgeous galaxy apartment, it was an intimate affair, but it gave us a taste of what was to come. Despite it being intimate, it was most certainly a classy affair, as expected.

Above: Malaika Arora Khan and Amrita Rao with family Below: Karan, Kabir and Salman looking dashing.

Once the big day arrived, all eyes were on Falaknuma Palace, which was luxuriously decorated. Now, although it was indeed a super secretive ceremony, thank God Twitter and Instagram exist, as we got to see special snatches of the happy couples day, along with some excellent shots of just who wore what.

Arpita looked truly radiant in a beautiful red lehenega, by Abu and Sandeep, accessorised with regal kundan jewellery, her make was done by the genius Daniel Bauer. Brothers Salman, Arbaaz and Sohail, who had the honour of performing the rituals, were dressed in highly masculine, traditional saafas.

1. Arpita the blushing bride 2. Sister Alvira with family and friends

Now, as for the guest list, well that was a magnificent cavalcade of Bollywood’s finest actors, actresses and director, including director Karan Johar, actresses Priyanka Chopra and Katrina Kaif, Kiran Rao, and director Kabir Khan with wife Mini Mathur.

More on the fashion side, we got to see Malaika Arora Khan look absolutely stunning in a Seema Khan green lehenga. Arpita Khan Sharma looked gorgeous in a white lehenga and Priyanka Chopra looked every inch a princess in a royal blue sari.

1. Salman with the newlyweds 2. The outstandingly decorated wedding cake, which weighed in at 150kgs

All in all this was a star-studded extravaganza, bursting with luxury and of course love. We wish he couple a life of health and happiness. Xx

Sahil proposed to Dia in the middle of  Brooklyn Bridge in New York, getting down on his knees to confess his love to Dia, and she of course said yes, as the New Yorker’s and tourists alike applauded and cheered for the couple. They were in the US for the IIFA 2014 awards in Tampa Bay and it was there where she made the announcement on Twitter. Ever since that day we at Think Shaadi have been waiting in anticipation for the wedding.

The couple had to wait a while to announce their wedding date, because they were busy working together as c0-producers on Bobby Jasoos. Dia finally let the cat of the bag in mid-July to reporters saying – “If I tell you everything right now, then there would be no surprise. But you would not need to play detective. I will get married in India itself in October.” Mirza told IANS. Then a few weeks later Dia broke the news that October 18 would be the big day!

The three day wedding celebrations started on the 16th of October, with the mehendi function, and Dia shared the news via twitter to her fans. The celebrations were handled by wedding planners Natasha Katgara Gocal and Erina DeAbreu of Divinity Weddings, who also managed Bollywood actress Vidya Balan wedding.

Ritu Kumar said in a statement described her creation: “The kurta has a vintage cut used in the courts of Agra around the 15th century. The neck is deep and worked in embroidered gota patti on net like the technique used at the time. The gold metallic taar used is of silver worked in gold thread and dori to give it a stylised plant inlay look. Each panel is highlighted with a flowering buta. The odhni is fuschia worked with small butis of the same beaten gold gota patti, a fuschia brocade deep sinjaf finishes the edges of the outfit.”

October 17th was the Sangeet, with Dia choosing to go with a hypnotic blue and gold Anita Dongre lehenga, which she accessorised with a three string polki and pearl piece, with a large blue pendant. Sahil looked dashing in a signature black buttoned up Raghavendra Rathore bandgala.

Dia also choreographed a dance piece prepared specifically for the sangeet, which Sahil and his family members were eagerly awaiting to watch her perform.
–

<p>
The wedding and reception took place on the 18th at Rosha Farms, a private farmhouse in Ghitorni, South Delhi. It was was very intimate affair for Indian high society standards with guest size ranging from 100-500 during the three day celebrations. Notable guests included Rajkumar Hirani, Lara Dutta and Mahesh Bhupathi, Sushmita Sen, Roshan Seth, Nikhil Advani, Aditi Rao Hydari, Pallavi Sharda and Cyrus Sahukar. There was heavy security protecting the privacy of the couple and their guests.  They were however very sweet to come out and greet the waiting news crews outside the gates, to have some snaps taken.
<p>

–
Dia, went back to Ritu Kumar for the wedding day. She choose a subdued beige and green sharara inspired by Ritu Kumar’s Falaknuma collection, which highlights the heritage of craftsmanship that comes from Dia’s birth city of Hyderabad.
–

–
The wedding has been captured by our friends at The Wedding Filmer and they caught this beautiful moment of Dia Mirza moments before Sahil’s baraat arrived at her door. Dia captioned the moment perfectly – “I feel like I’m on a movie set, waiting in my van for my diva hero to arrive.”
–

Finally for the reception Dia choose to give with a gold and peach party lengha from Shantanu & Nikhil. They were thrilled to see Dia transform their outfit with such class and grace.
–

–
Sahil once told The Bombay Times in an interview, “What I love the most about her is that in one word, she is pure. She is very giving and all heart, which is also a problem as then you need to take care of your heart. She lights up a room as soon as she walks in.” We wish the couple a very long and wonderful married life xx
–
Images courtsey of Dia Mirza, The Wedding Filmer, Adil Hasan, Instagram and Twitter